I'll be honest - I've always thought a cruise would be completely at odds with my idea of a great holiday, which involves wildlife, photography, exploration and kindred spirits in equal measure. But this year my eyes have been well and truly opened to the potential of expedition cruising as a unique platform for photography.

Exploration of Svalbard on the Silver Explorer allowed my group access to stunning locations and species that other photography holidays just can't reach, all in the company of like-minded crew and fellow passengers, and in the style and luxury on which Silversea has secured its reputation…I can't believe I've taken so long to catch on!

Here are a few postcards from our exclusive Travel Bureau Svalbard expedition cruise, featuring highlights of our sightings and experiences from a truly phenomenal journey.

The crew predict we'll see whales, and sure enough, as the ship creeps through an area of krill, humpbacks, fins and minkes glide serenely through an ocean so calm and fluid it could be mercury stretching to the horizon under the never setting sun. Their bulk barely raises a ripple against its obsidian glassiness, and the fulmar gliding beside us is perfectly reflected as we slip gently away northwards.

I stay awake as midnight strikes, and the sun still casts a bronze beam across our bow.

It is strange to think it will not set throughout our entire voyage.

Breeding sea birds swarm in unfathomable numbers from cliffs so sheer and tall that I have to lie flat, lens up like a periscope at 90 degrees, to see all the way to the tops without toppling backwards. So inhospitable are these frigid seas that sheets of barren granite are the only haven these birds can find to keep them out of reach of would-be predators. Individual shapes flash out of the swarm, to feed shrieking chicks, before being re-absorbed into the ever swirling mass. My favourites in the throng are the charismatic bespectacled guillemots, little auks and skuas.

Later we stretch our legs on a good length hike, learning from resident botanist HP about the unexpected flora dotting the tundra with purples, yellows, white and a thousand shades of green. Moss campion and Arctic bell are heather particularly striking.

Suddenly my eye is caught by a furtive trot, instantly recognisable as a fox. This is an Arctic fox, one of the key species I've come to photograph, so I'm thrilled to see one so soon. He is completely unphased by human proximity, and even as excited non-photographers squeak out oooohs and aaaahs, he continues hunting amongst and around us. Eagerness sculpts his little body into lithe contours of predation, all burnished in his fine brunette summer coat. I wouldn't dare have hoped for this quality and length of encounter with an Arctic fox: it is the moment that seals my transition from cruise doubter to cruise devotee.

Back on Silver Explorer, we start to glimpse icebergs, freshly calved from the glaciers which smother so much of Svalbard’s landmass. Conversation inevitably turns to jokes about the Titanic, lending the frozen intricacies and blue tinged beauty a sinister air. We are eager to explore them in detail from our Zodiac expedition craft, and as we draw closer to their source - the massive ice cliff face of a glacier whose slow surge to the sea has been ongoing for tens of thousands of years - we begin to appreciate the vastness of the ice here. The ship is thrillingly insignificant, and our Zodiac expedition craft miniscule, in the context of this monster...can you spot us in the picture below?

Actually being able to walk up on to a glacier is something I hadn’t imagined would be possible on this trip, but again the crew come up with the goods, and at the hugely picturesque 14th July glacier we embark on a rigorous hike along the scree slopes to the edge of the ice sheet itself. In blazing sunshine and temperatures of 11C, hiking in a t-shirt, it seems absurd that we are deep in the Arctic Circle, and it is painfully obvious that the glacier is receding very quickly - about a quarter of a mile in the last 3 years according to Robyn our marine biologist. The heat means that huge chunks detonate from the face of the glacier throughout the middle of the day - a spectacular birthing process for those icebergs we’ve encountered.

Having seen so much, and had wonderful opportunities to photograph it all, it would seem churlish to wish for anything else… but I’m still really keen to see walrus, and although the question has remained largely unspoken, all the passengers are anxious to know whether there is any chance that we’ll see a polar bear. It seems increasingly unlikely as the end of our journey draws closer.

But again the experience, knowledge and commitment of the crew to find us the experiences we crave leads us to new shores. We find not only walrus, complete with baby, but polar bears! Simon, our onboard ornithologist, is transformed from mild mannered scientist to instant superhero for spotting the first bear at an unbelievable distance.

Watching two ice bears squabbling over territory and food is fascinating, and we are treated to the victor ripping apart the rancid remains of a seal and presenting us with a bloodied face. Later we encounter a lone bear patrolling the scant pack ice in search of food and bag a classic shot of the animal in it’s hunting habitat.

The voyage has exceeded all expectations for my group, who are going home with shots of a lifetime and stories to match. It seems we are all converts to expedition cruising, and will be looking for new places to explore onboard in future.

This voyage was a bespoke photography expedition cruise exclusive to Enlightened Photographic Safaris in partnership with Travel Bureau. For details of future photographic expeditions please contact us

Is Noise Giving You A Headache???

My First Wildlife Photography Exhibition In The US - A Guided Preview

My Top 5 Tips for Sharper Photography

Is Noise Giving You A Headache??? 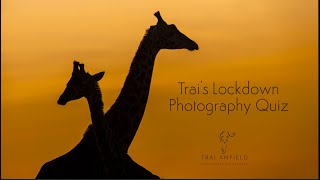 What’s In The Bag?